Research in the area of Baranja.‍From Batina to Donji Miholjac in the Republic of Croatia and from Mohács to Siklós in Hungary.

We visited the Baranja area from Batina to Donji Miholjac in the Republic of Croatia and from Mohacs to Siklos in Hungary. We interviewed Stipan Šašlin - mayor of Draž, Zdenko Bognar - president of the local committee of Baranjsko Petrovo Selo and the Fazan hunting association, Pavo Damjanov - president of the Duboševica hunting association, as well as local farmers, hunters, waiters, and musicians.
‍
Opinions regarding migrants and refugees are mixed, from lack of interest and annoyance to showing signs of empathy and even solidarity. Many of the interviewees express concerns about the consequences of the fences on the local wildlife.

Crossing over to Hungary, we encountered a strong language barrier and the people we approached showed little interest. Government officials were not willing or authorized to talk and the locals declined to be interviewed. Stopping by the fence is strictly forbidden, and the interdiction is systematically enforced by Hungarian Border Police.

“In setting down the parameters of the public discourse on migration, I take the Hungarian-language governmental media that advocates the Hungarian solution to migration to be an integral part of the ethnographic analysis. This media landscape is saturated by “societally targeted advertisements” (társadalmi célú reklámok) which aggressively highlight the dangers of migration in the form of TV advertisements, billboards, leaflets distributed to homes, print advertisements and the like.”‍
In Annastiina Kallius, The East-South Axis: Legitimizing the “Hungarian Solution to Migration”, 2017‍

We leave Zagreb around 3pm and take the highway to OSIJEK. We pass by DARDA, through ŠVAJCARNICA, ČEMINAC, KNEŽEVE DVORE, SUZU, ZMAJEVAC to DRAŽ. In ZMAJEVAC, we have dinner and make camp in a cornfield outside of DRAŽ near the Danube canal. 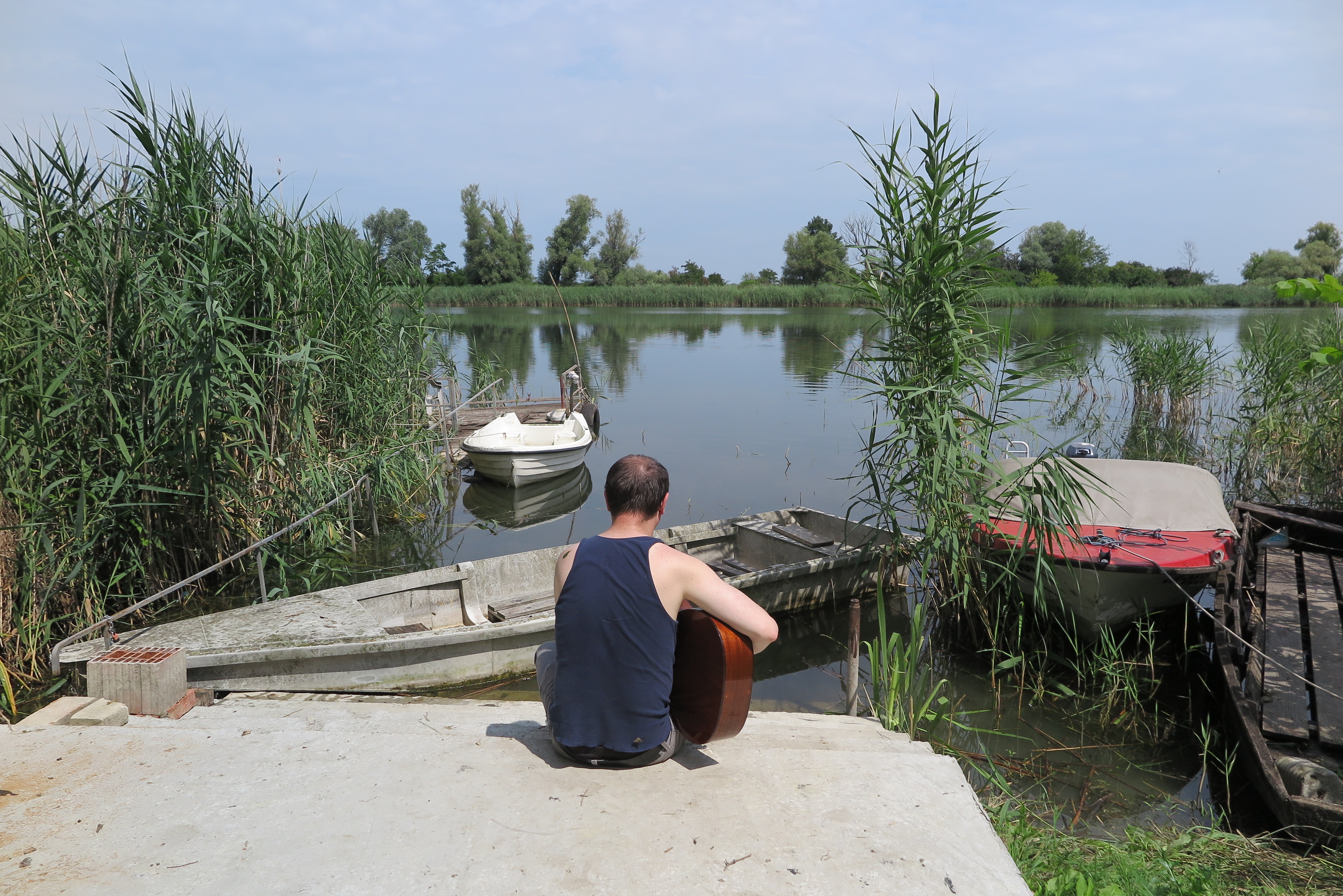 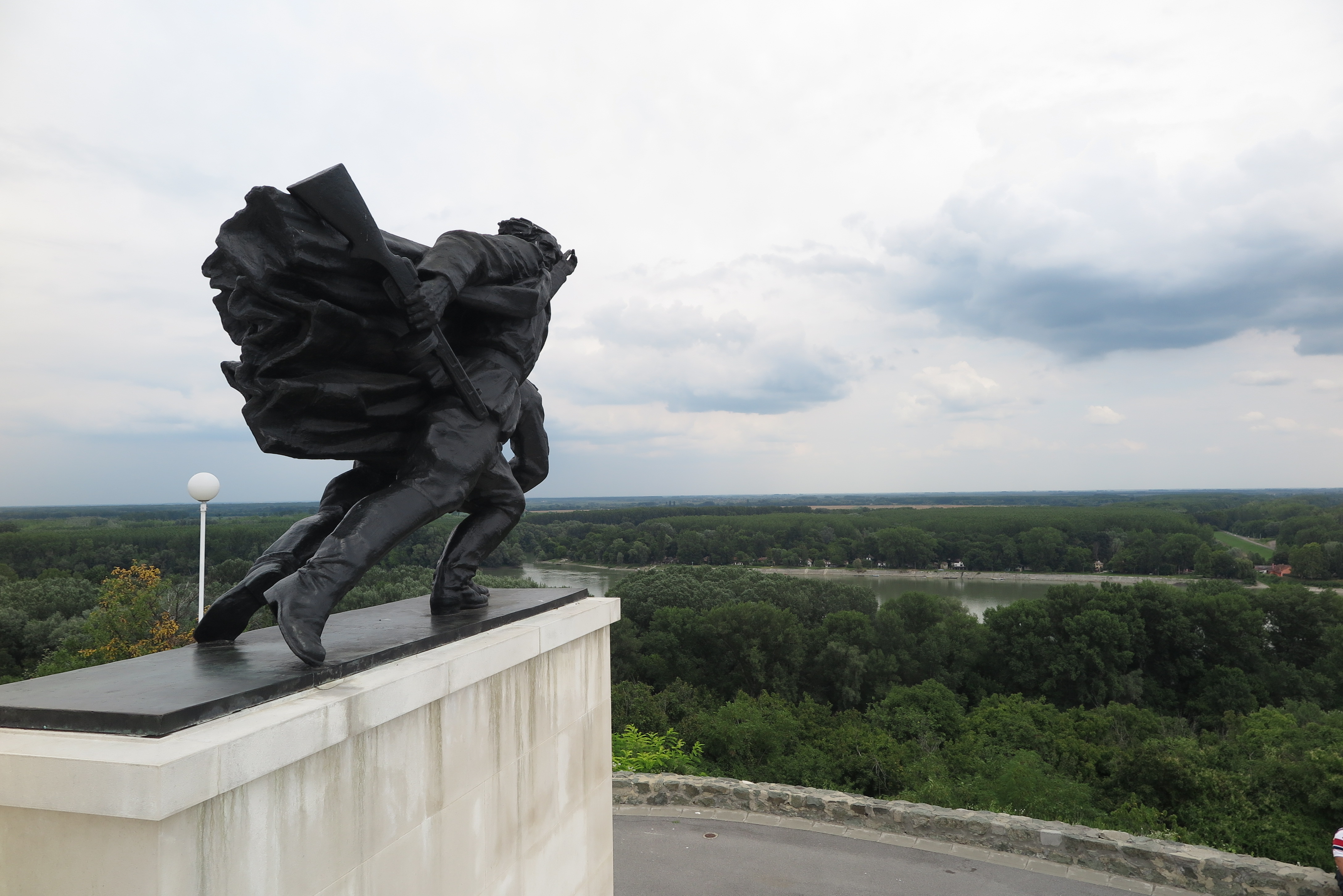 We wake up on the Danube canal and follow the border and canal through the fields, often encountering deer. We find old concrete pillars without a fence. Some kind of old barrier. It's a swampy area. We find state border markings overgrown with bushes. There is a border watchtower. There are picnic places around the canal where locals go fishing and some weekend houses. Everything is calm. We go to the village of GAJIĆ. We have a coffee in Caffe bar Marok and go to the Gujčić store across the street. The saleswoman is not up for an interview, but she gives us the contact of her father-in-law, who is the president of the Duboševica hunting association and might be interested in giving a statement/interview. We go to BATINA border crossing, Batina (HR) - Bezdan (SR), and to the Batina Battle Memorial Complex with the monument to Antun Augustinčić. The border and the Danube are clearly visible from the monument.
‍In Batina, Draž and Zmajevac, there are Baranja surduci (streets), streets and roads cut through a hill, containing houses buried in the ground (known as "gators”). Often walled with bricks, gatori are the unique architectural feature of the wine cellars in Baranja. We are filming Draž. We sit at the Piki cafe on the canal and find a sleeping location away from Draž to process the materials. 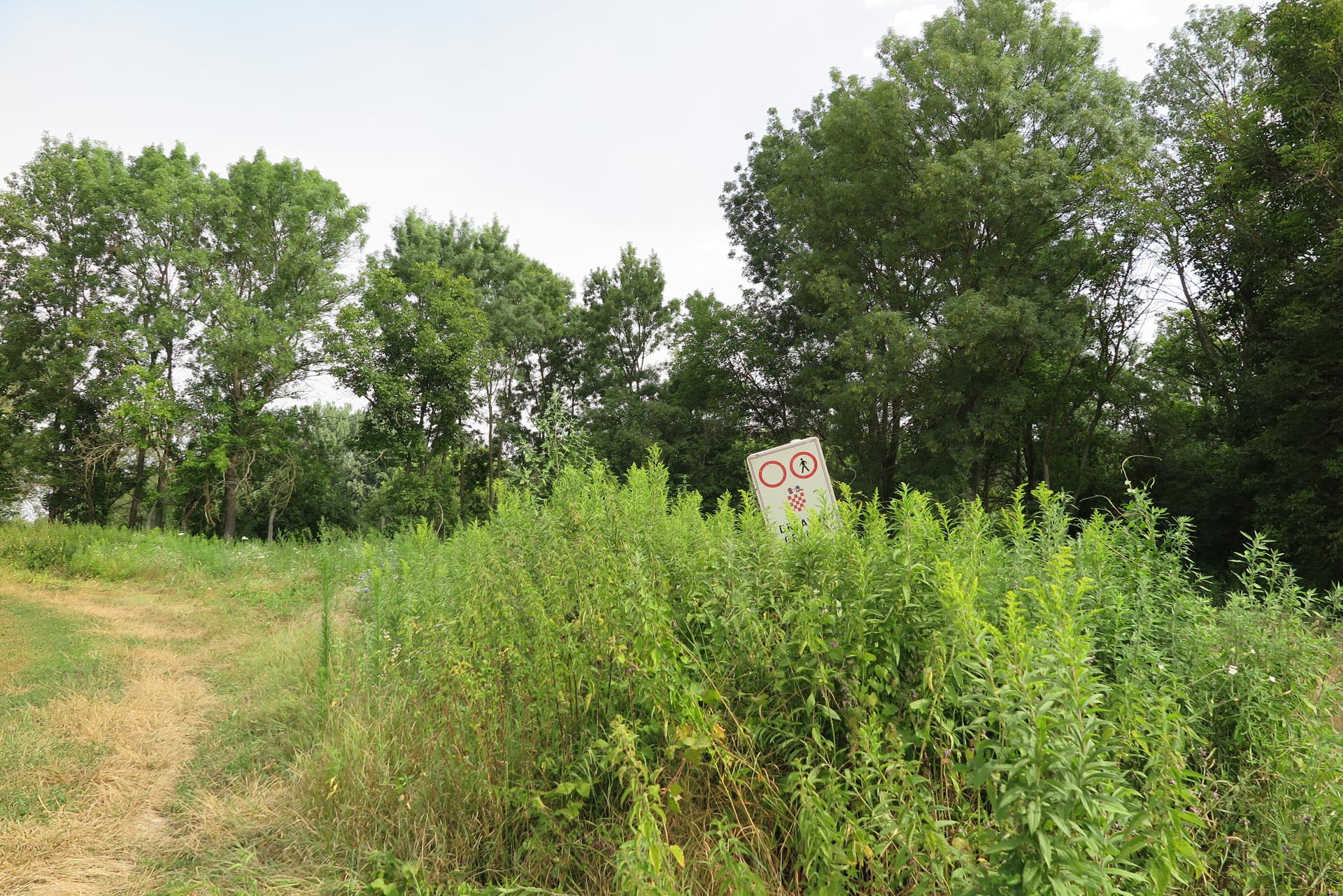 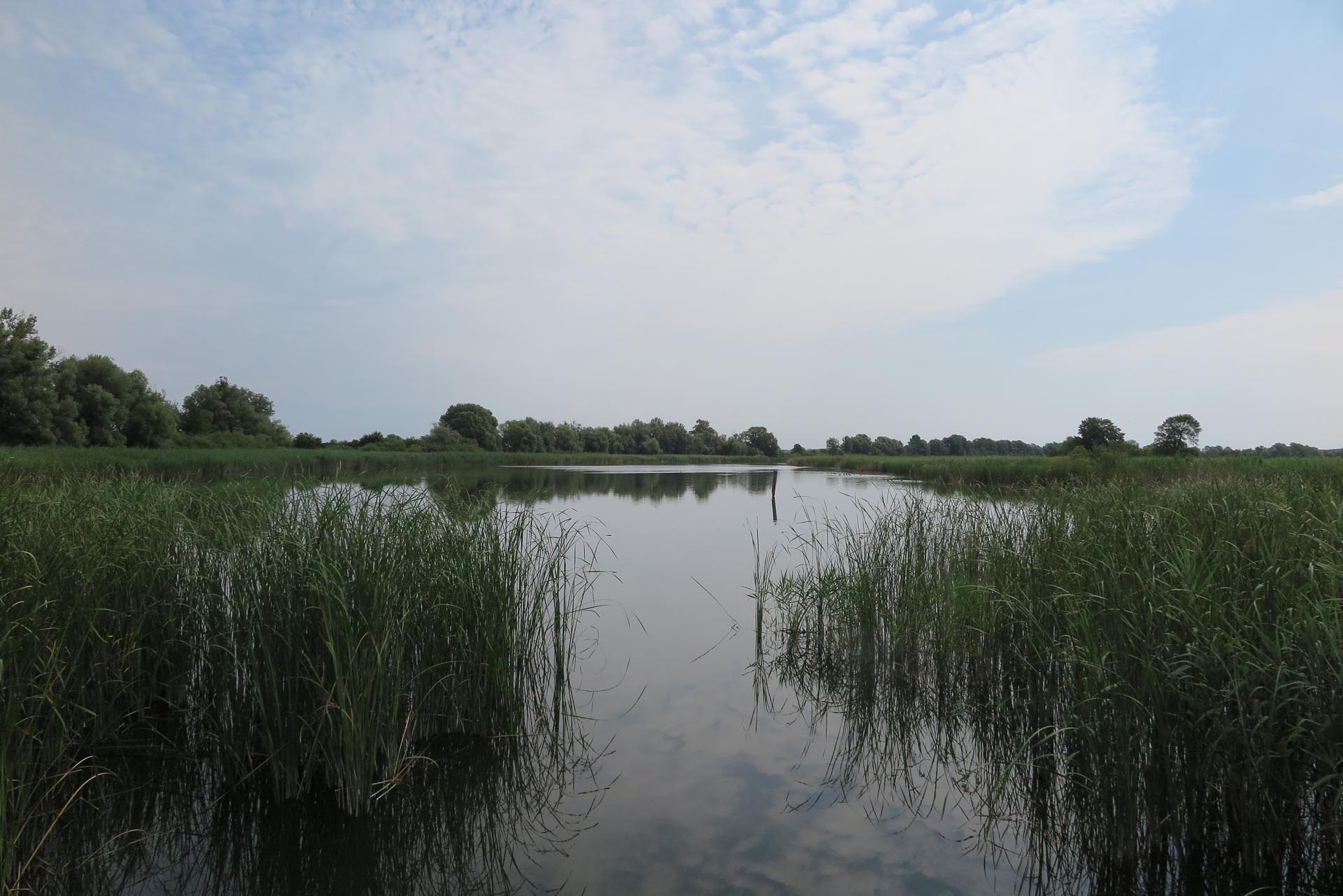 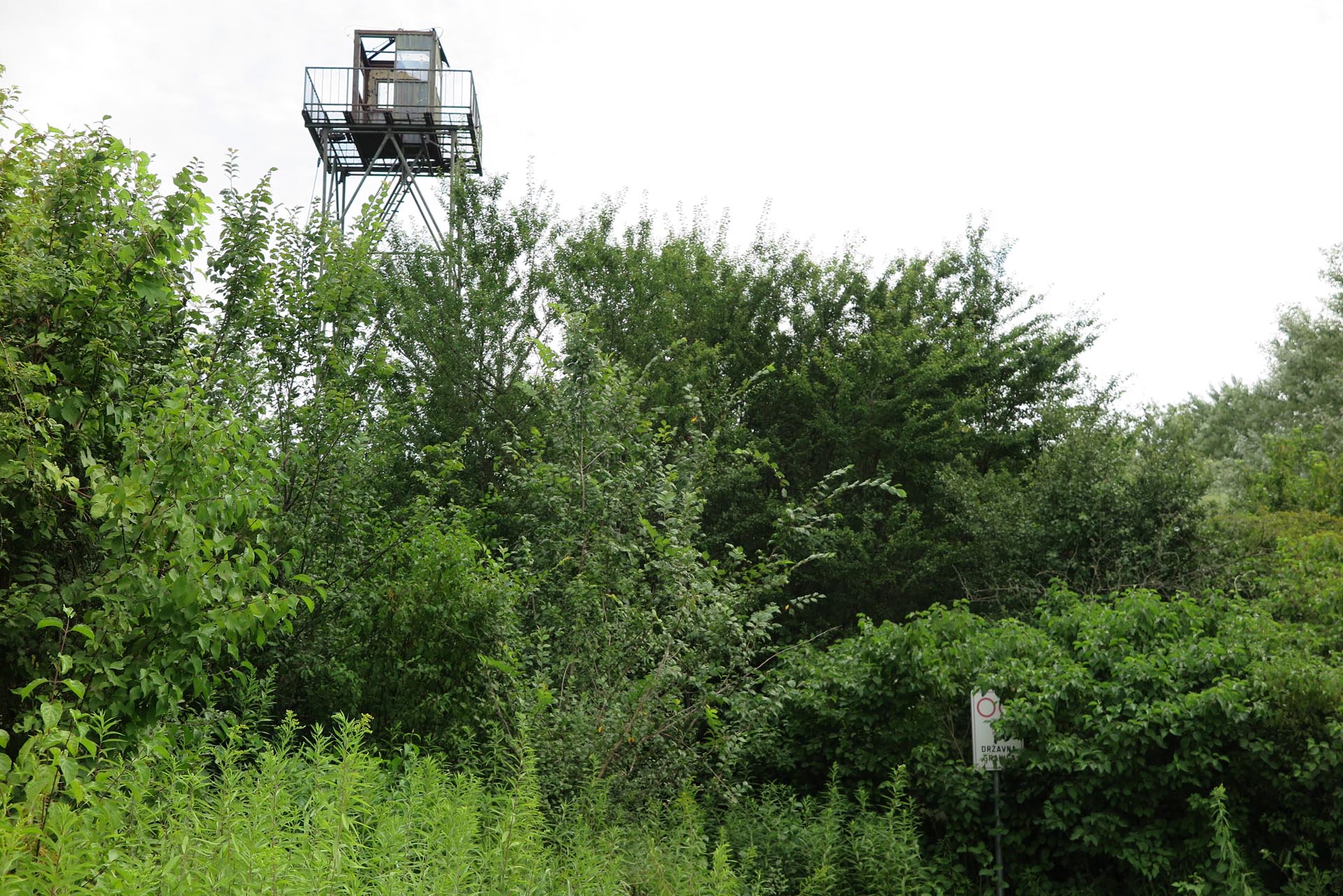 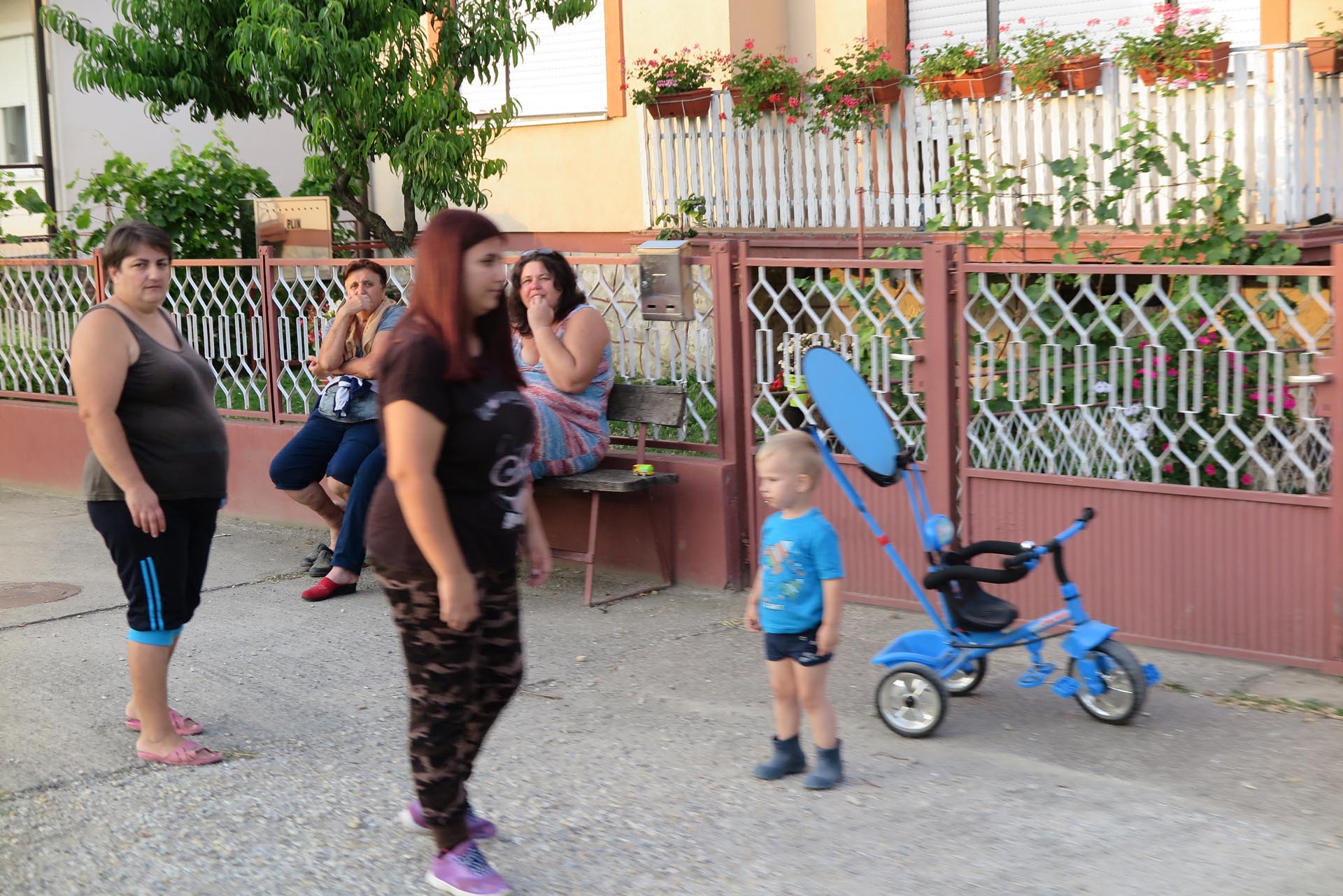 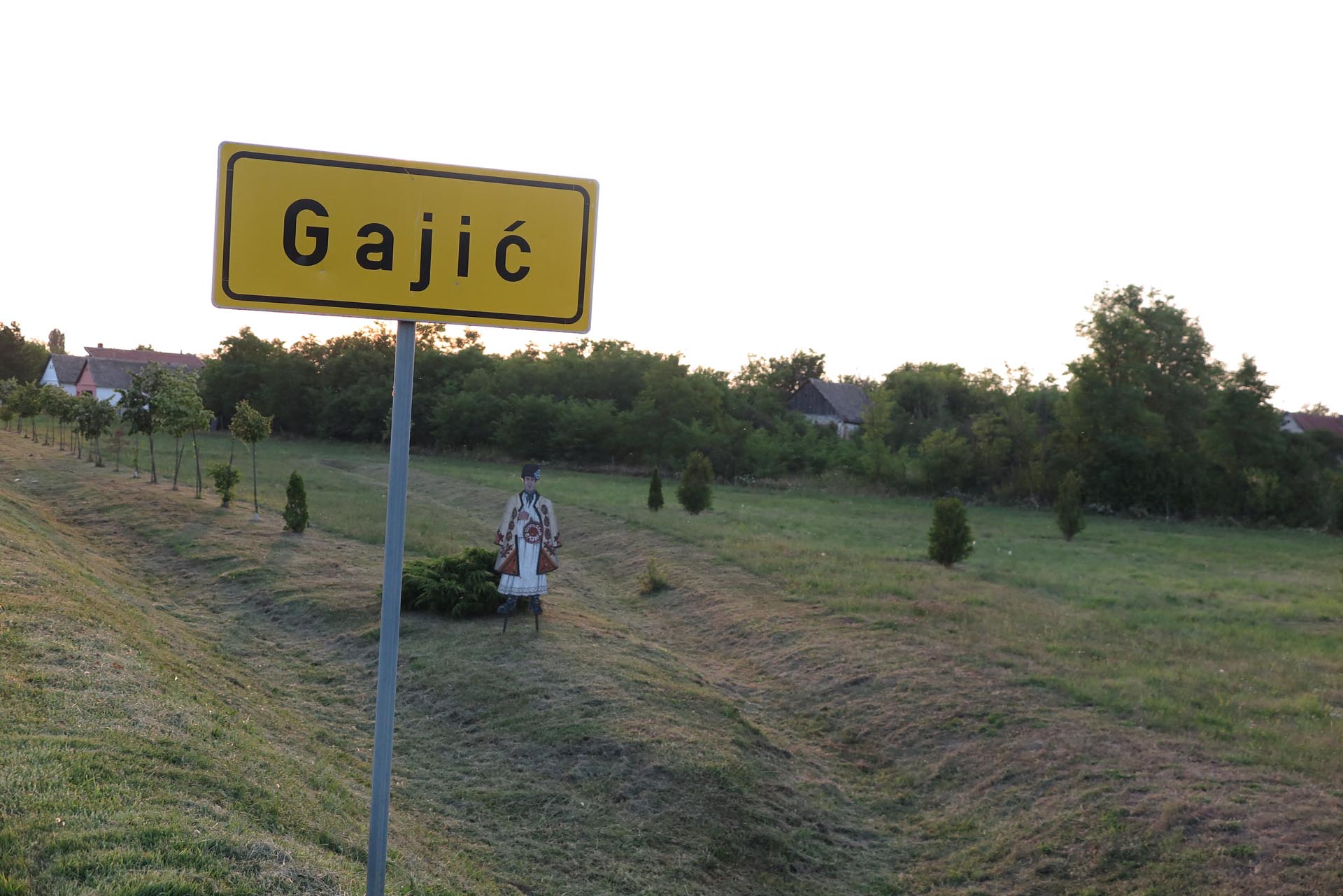 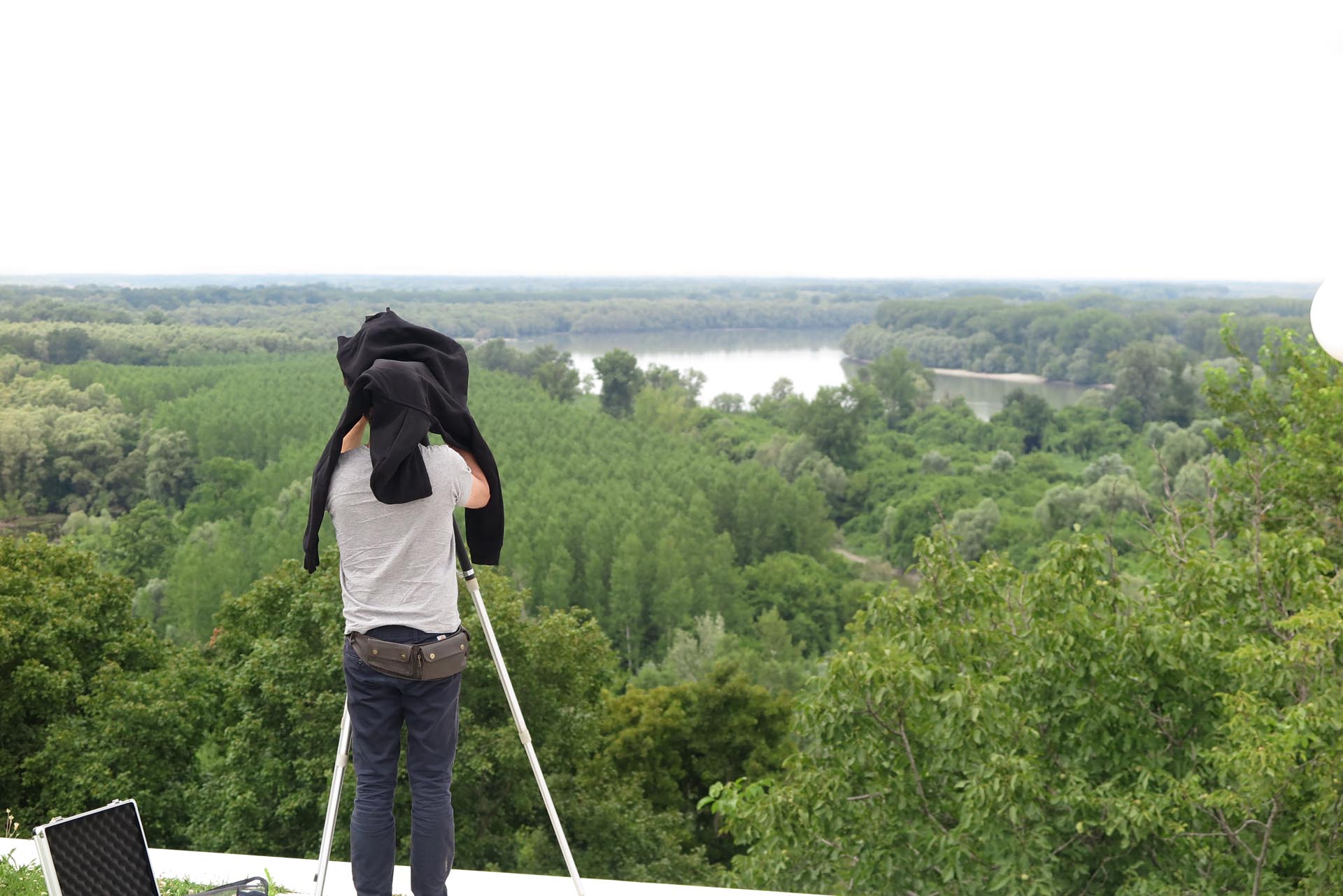 We talk to the mayor of DRAŽ, Stipan Šašlin. The conversation is very interesting but could not be recorded. We drink coffee at Caffe Bar Johnny and find some people to interview at the gas station: Fiš and his farmer friends. We go with Fiš to the border, the fence and the swampy area where they recently made a bike path on a dam/embankment with EU money. Now unusable, there is a fence with razor wire. We sit with him at a cafe on the beach Piki. Same location for sleeping and processing materials.

Nina: “So the border fence is the smallest problem here..”
Fiš: “A fence is a fence, it doesn’t matter to us.”
‍
Nina: “Did you have any problems with migrants
before there was a fence?”
‍
Fiš: “Well, we didn’t. But the police did.”

We wake up late. We call Mr. Pava Damjanov, who is the president of the hunting association in DUBOŠEVICA, and arrange an interview with him at 1 pm, at his home. After the interview, we go with him to Caffe bar Bolero in Duboševica. Then to KNEŽEVO, NK Belje, recording a football stadium and sunset. We also get footage of a column of trucks in front of the DUBOŠEVICA-UDVAR border. Sleeping again in the same place.

Pava: “I have actually never seen a migrant.
Seriously, even when they were coming en masse. I guess it’s luck…”

“I was amazed that in the interviews we did, the men were only interested in talking about the fence as it affected the animals they hunt. The topic of refugees is of course problematic, so I understand them being a bit closed about it, but the passion with which they spoke of the animals getting stuck in the fence or not being able to cross, seemed a bit misplaced.”
Aaron

THE OFFICERS TOLD HIM THAT IF HE TRIES TO CROSS THE BORDER AGAIN, THEY WOULD KILL HIM
BORDER VIOLENCE MONITORING NETWORK

Across the border into Hungary, crossing at DUBOŠEVICA-UDVAR. The police stop us because we are standing by the fence and filming. We oversleep at a hotel in the Centrum Panzio in MOHÁCS after processing our recent recorded material. 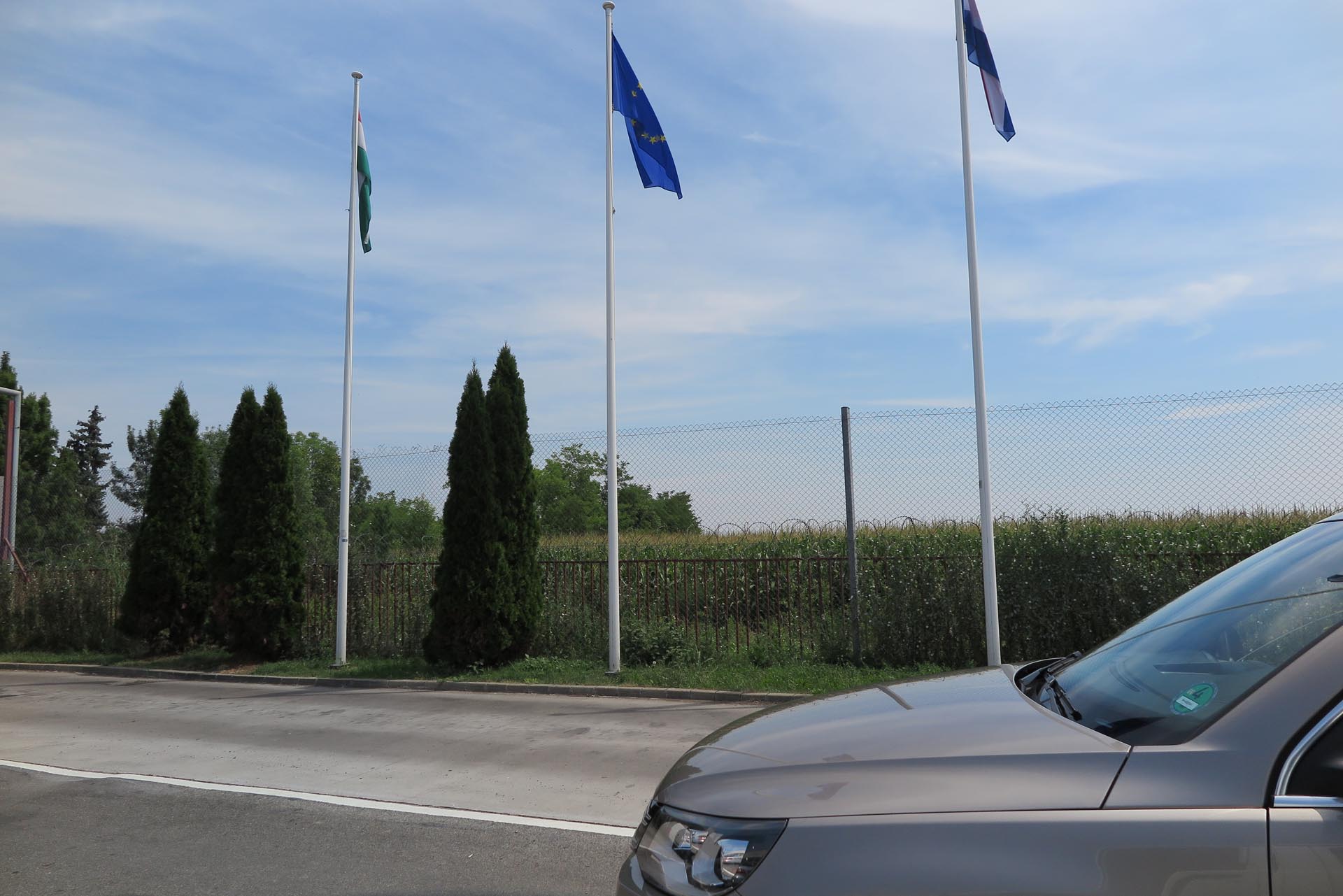 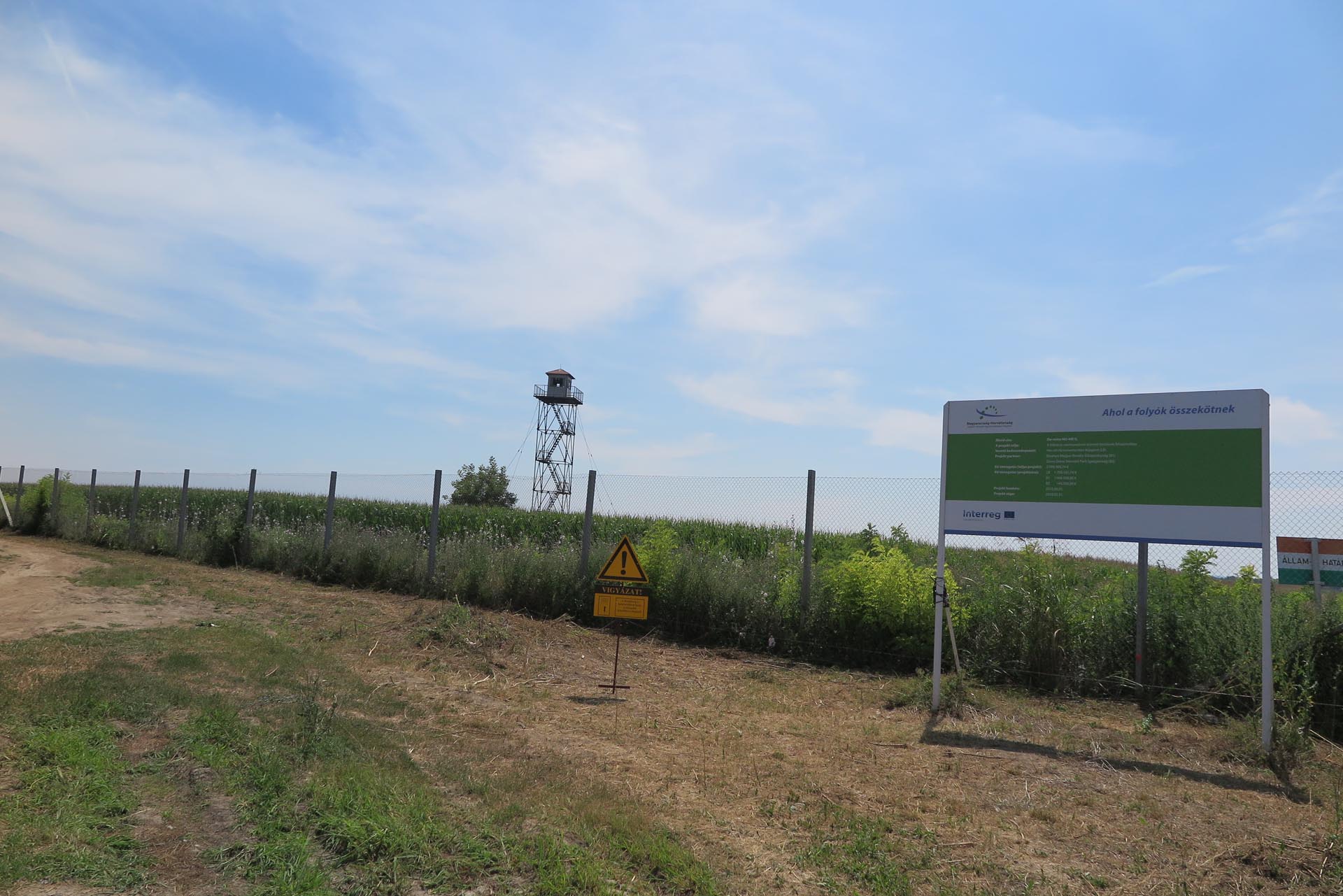 In the morning, we visit the mayor and the municipality in MOHÁCS. We are received by a deputy but he says he cannot be interviewed. We then visit the Busudvar Cultural Center where we are also unable to interview anyone because they do not speak English or German. Off to KÖLKED where we have the same unsuccessful meeting with the municipality. They certainly did not welcome us. They are not allowed to give an interview, and they are not interested. So, we go back to Croatia. We film the fence while driving. Later, we meet Tomislav in Beli Manastir, buy food and search for a cafe. In Jungle Café we interview a waitress. We sleep next to Šećeransko Lake near Šećerana.

“It was interesting to see the difference in culture and mentality crossing the border into Mohacs, Hungary. While not far from Croatia, the vibe was very different. The Croatian side seemed more rural and humble, more focused on farming and family, while in Mohacs (also not a large town), just walking down the streets it seemed like all the men were body-builders and all the women were pin-up girls.”
Aaron

Barman at Petarda: “In Beli Manastir, there were over 10,000 at one time, and Beli Manastir has 8-9,000 inhabitants, it was terrible...they stayed for about a week...they were not exactly civilized, it was bad.  They were part Afgan, part Syrian, I guarantee there were 90% men, no women...10% women and children, a catastrophe…”

Zdenko Bognar: “The police personally asked me to transport migrants over...and the next day they came to arrest everyone that was transporting them.  I can say it publicly, I am not ashamed of anything... Even the mayor and I were accused of some things...Unfortunately, they got my name wrong, not Bognar, but Bogdan, they were looking me up under Bogdan, but they got the mayor [laughs].”

We visit SIKLÓS and then KASÁD, a desolate Croatian village in Hungary. We don't find anyone to talk to. In Donji Miholjac, we interview guys from the band "Kandžija and The Naked Women" with Toxara in the coffee bar Runa. To Virje to sleep. 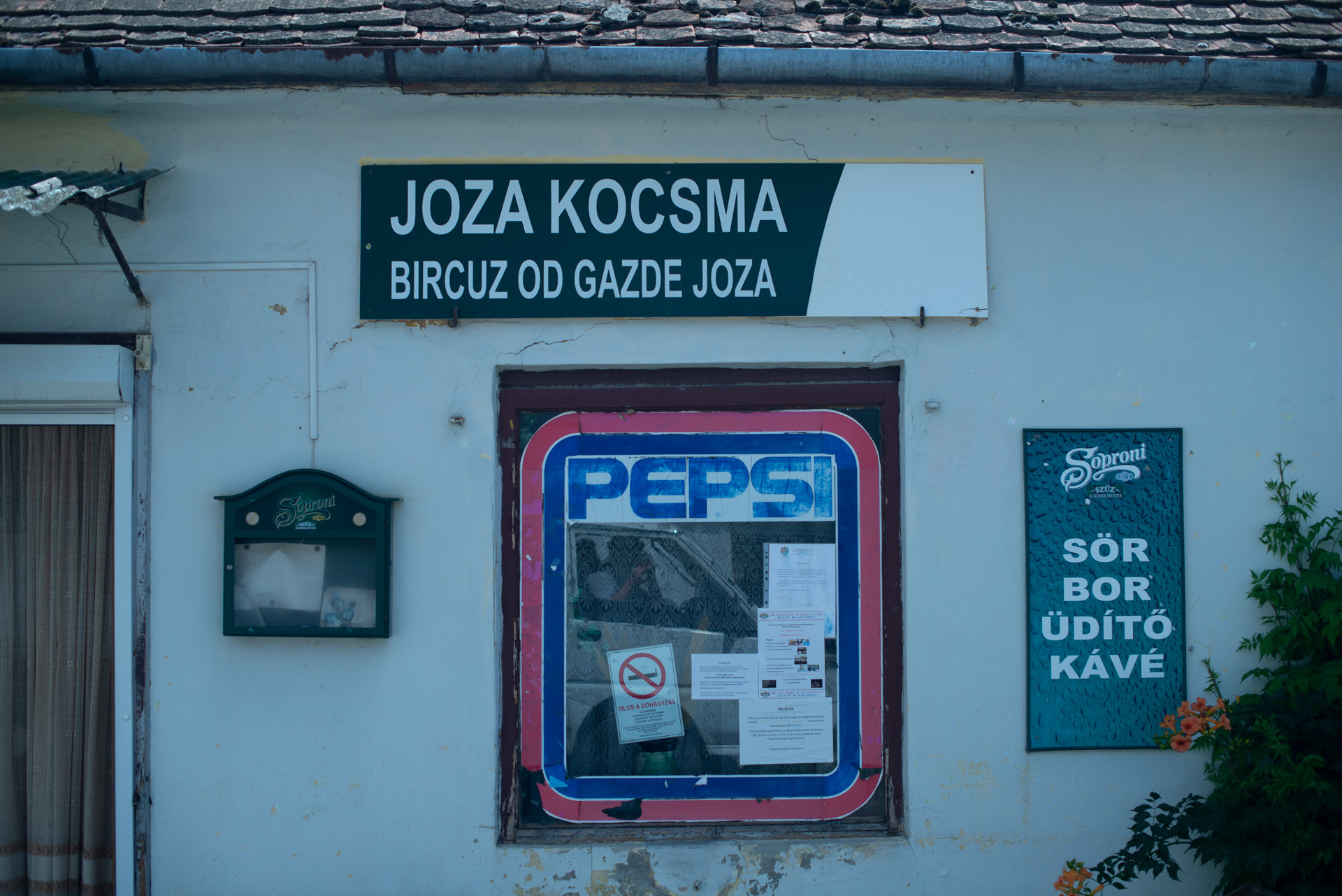 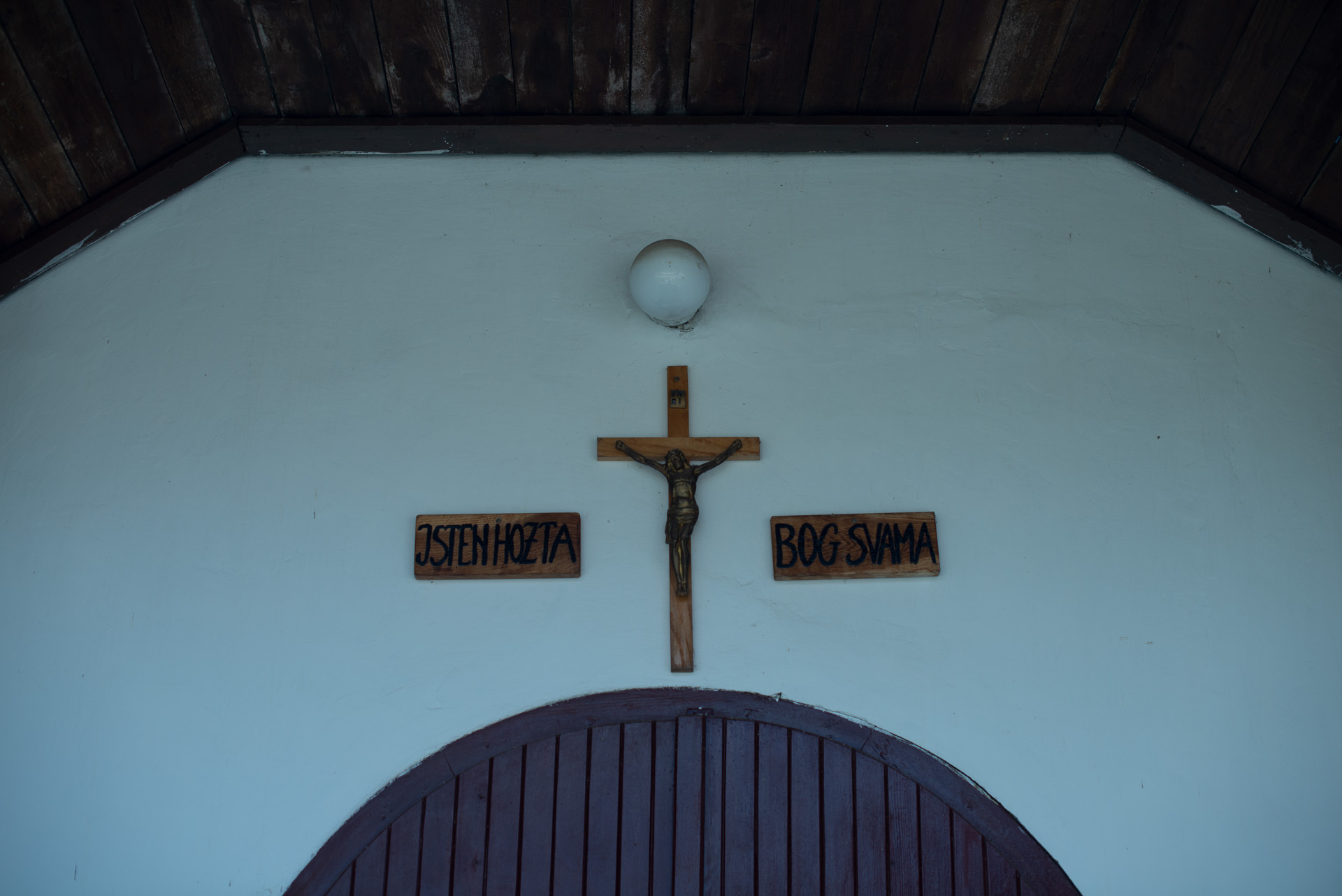 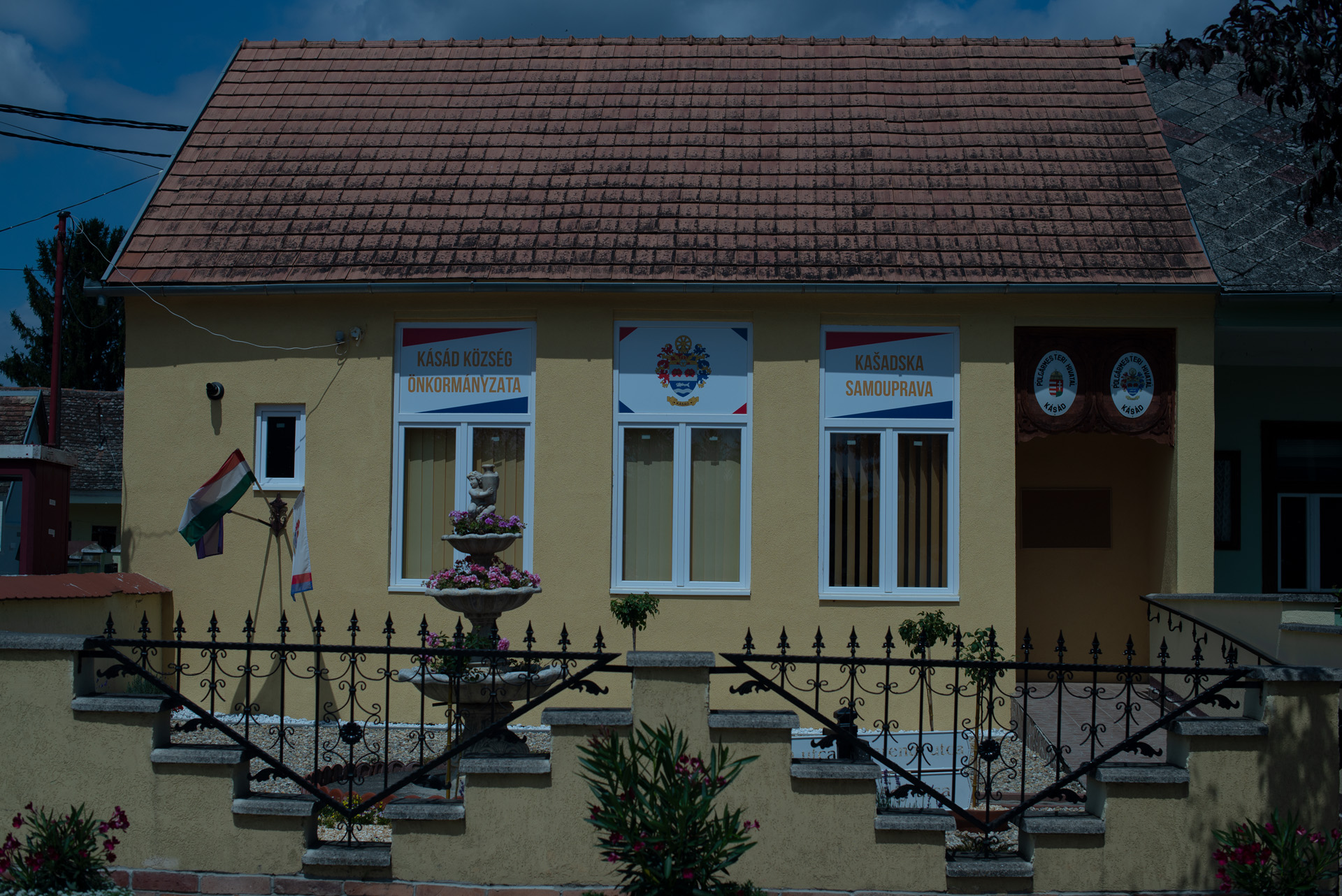 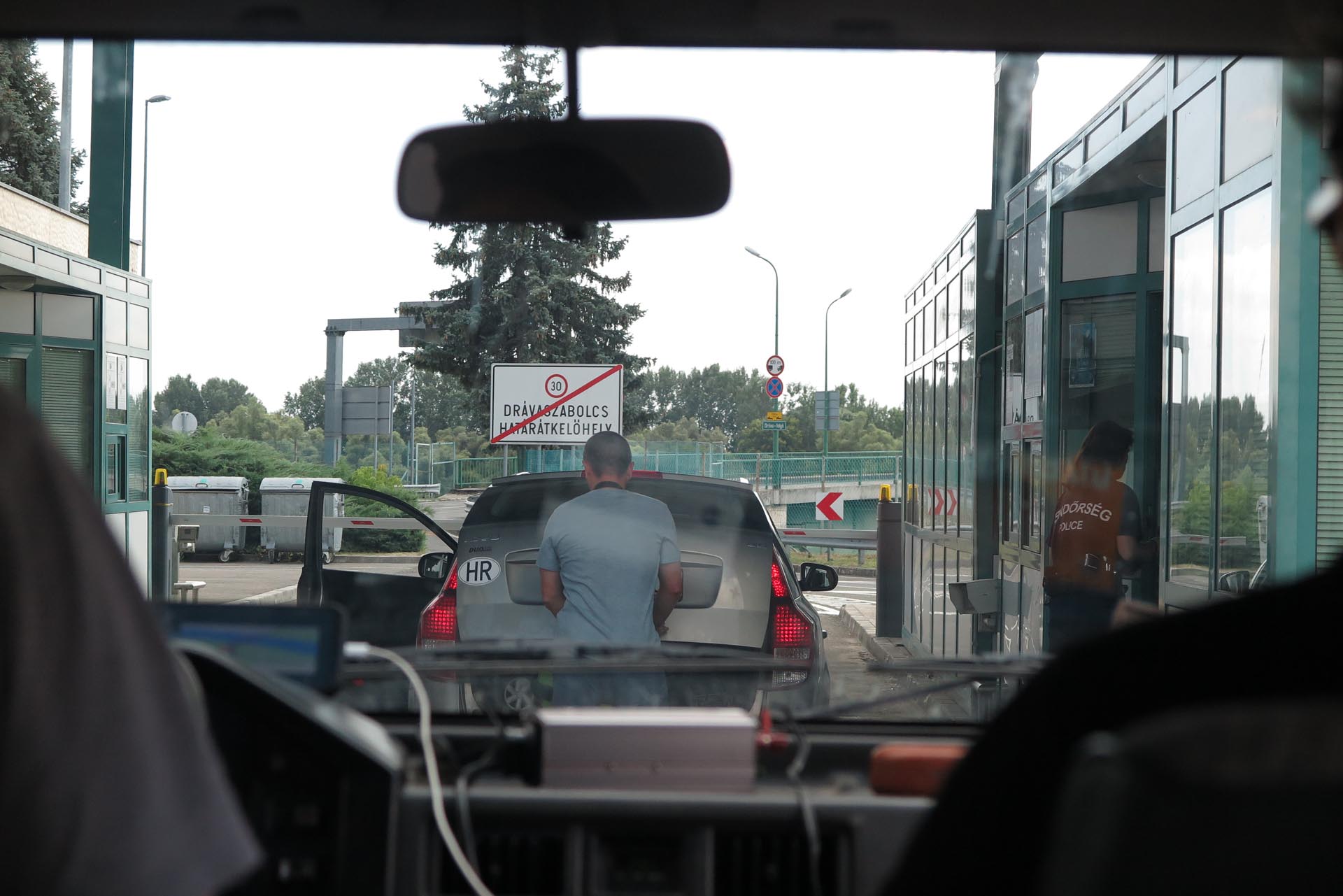 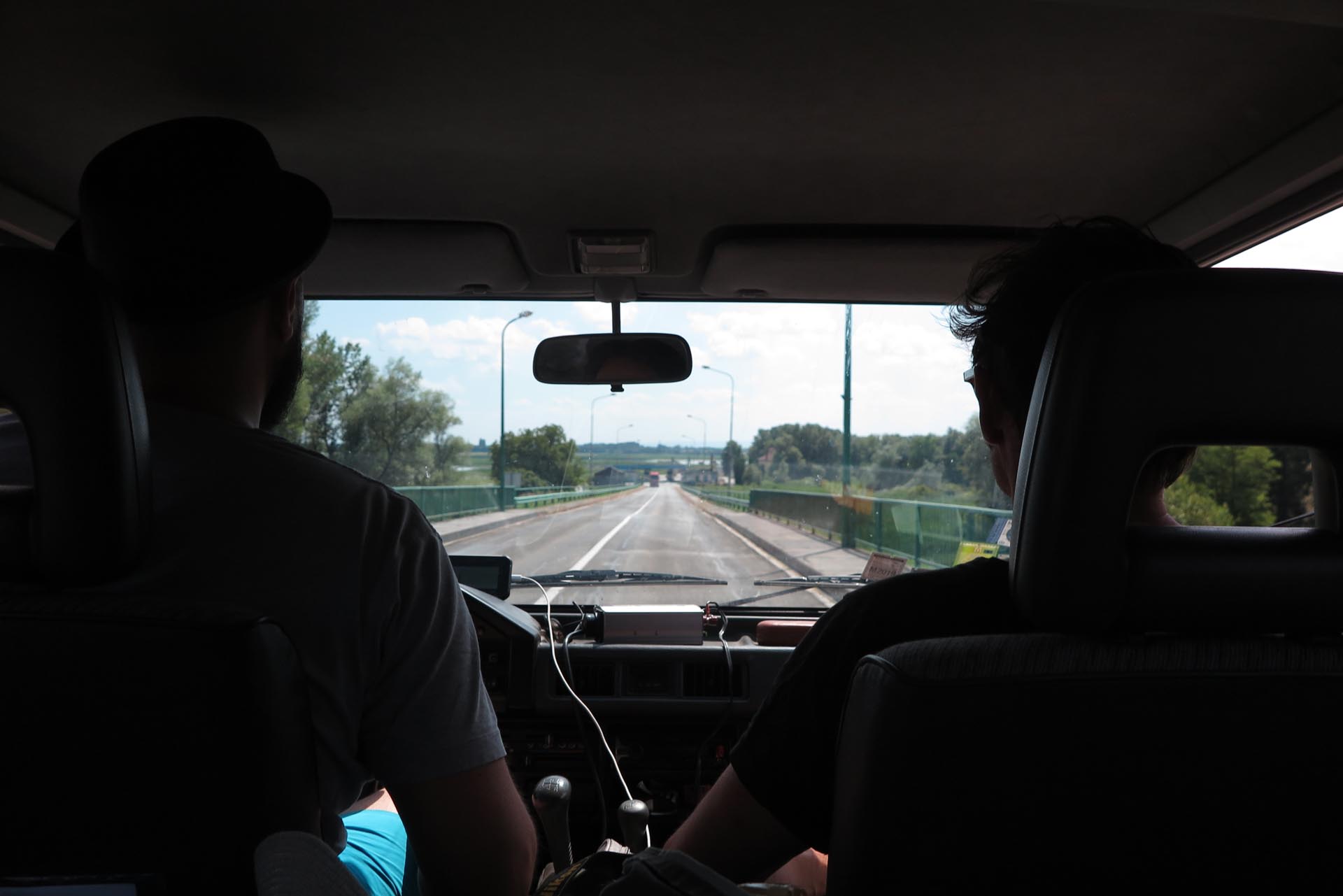 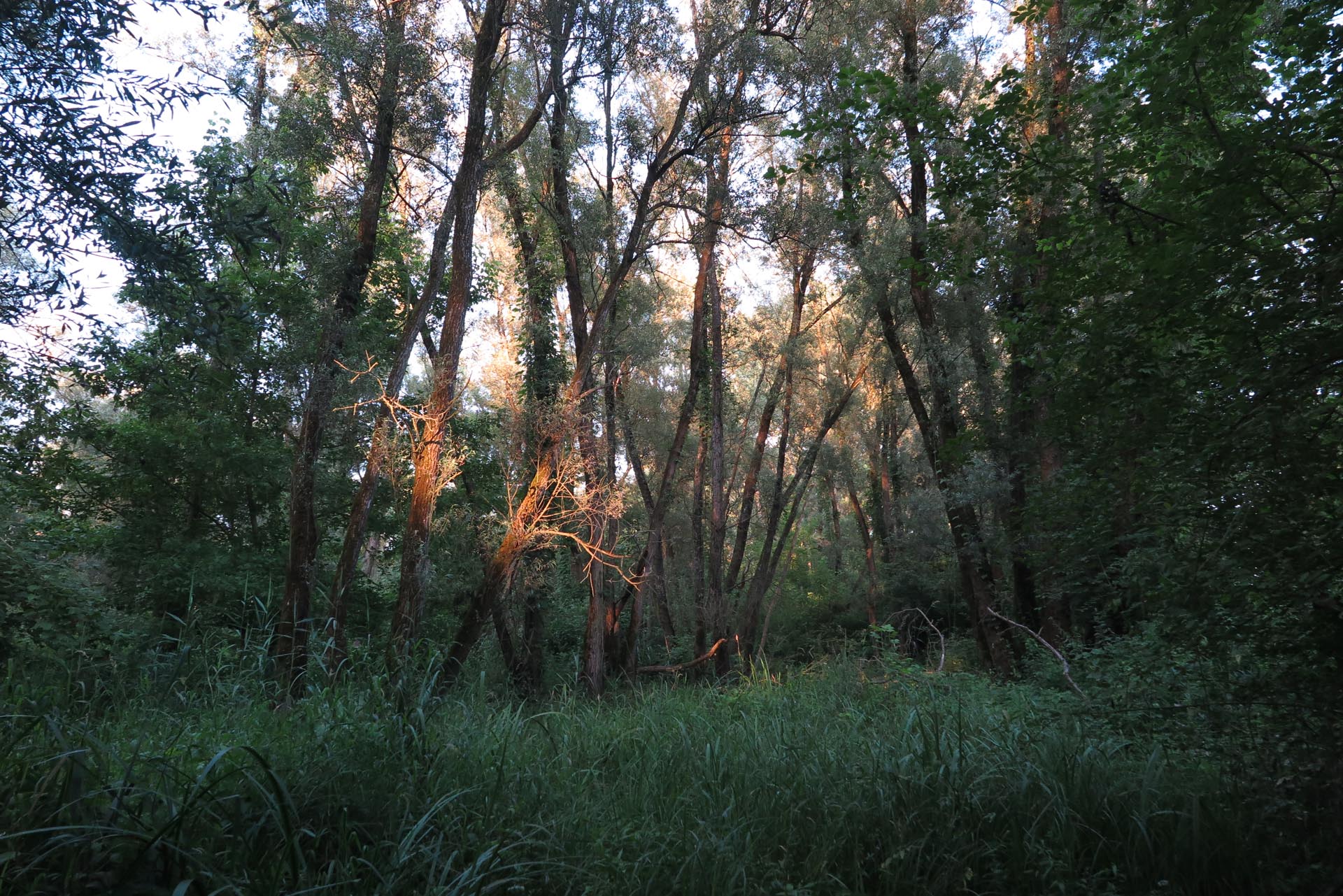 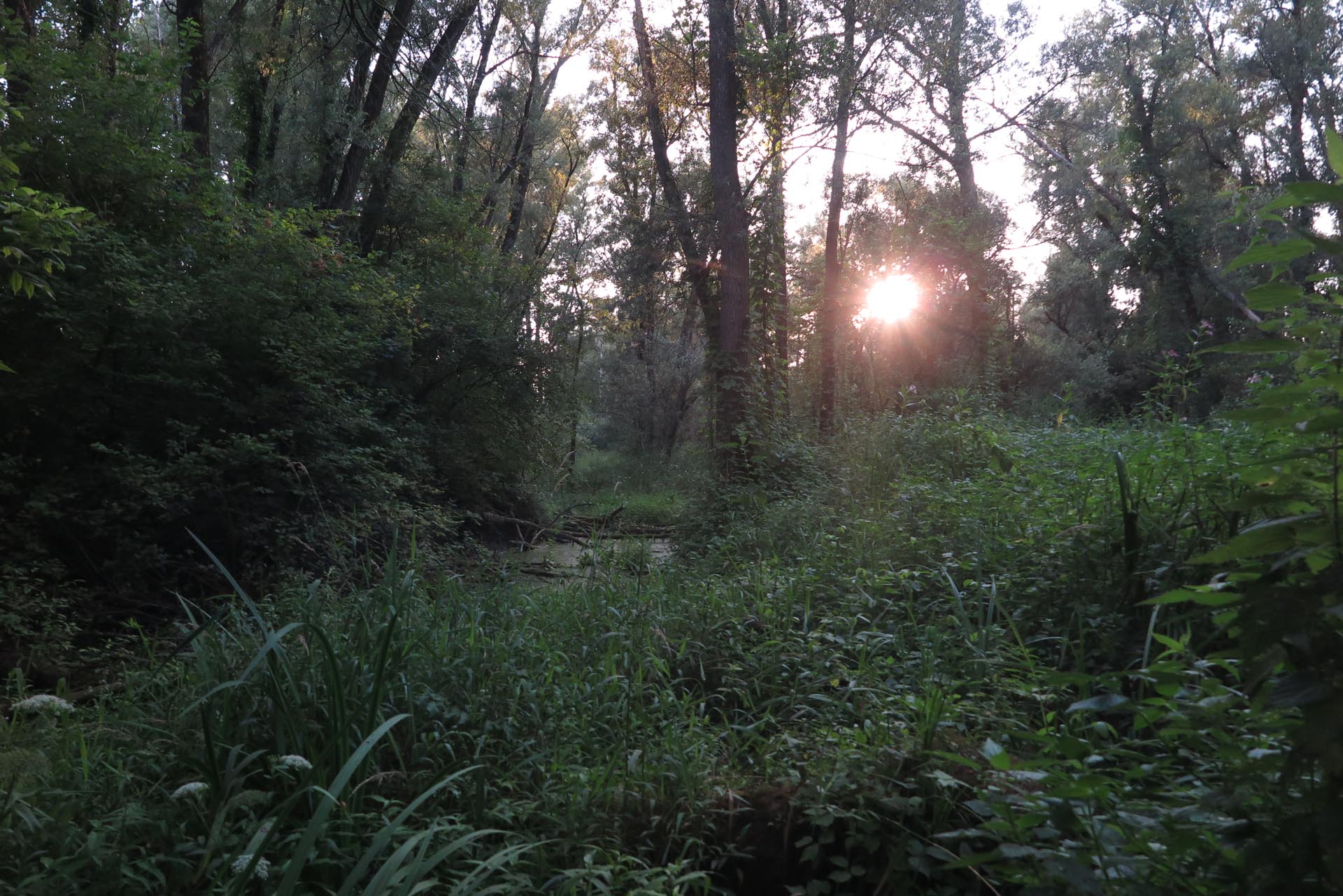 Toxara: “I think the locals are generally closed up here and then, you know, I think those stories get blown up a little too much. It's not easy for those migrant people, bro. You run off, I don’t know where from, you go through hell on the road, especially with kids and all... There were always stories that some shit was happening along the way, and all... You know I can't be objective about that now. But I think the locals are just not used to it. It’s big change for the small people here. They are generally not open to that kind of thing.”

“With all the stories around the fences, from the road, man resets his perspectives and perceptions, learns the path and takes notes, guess that is what we were doing, and still are, pushing this project forward”
Tomislav 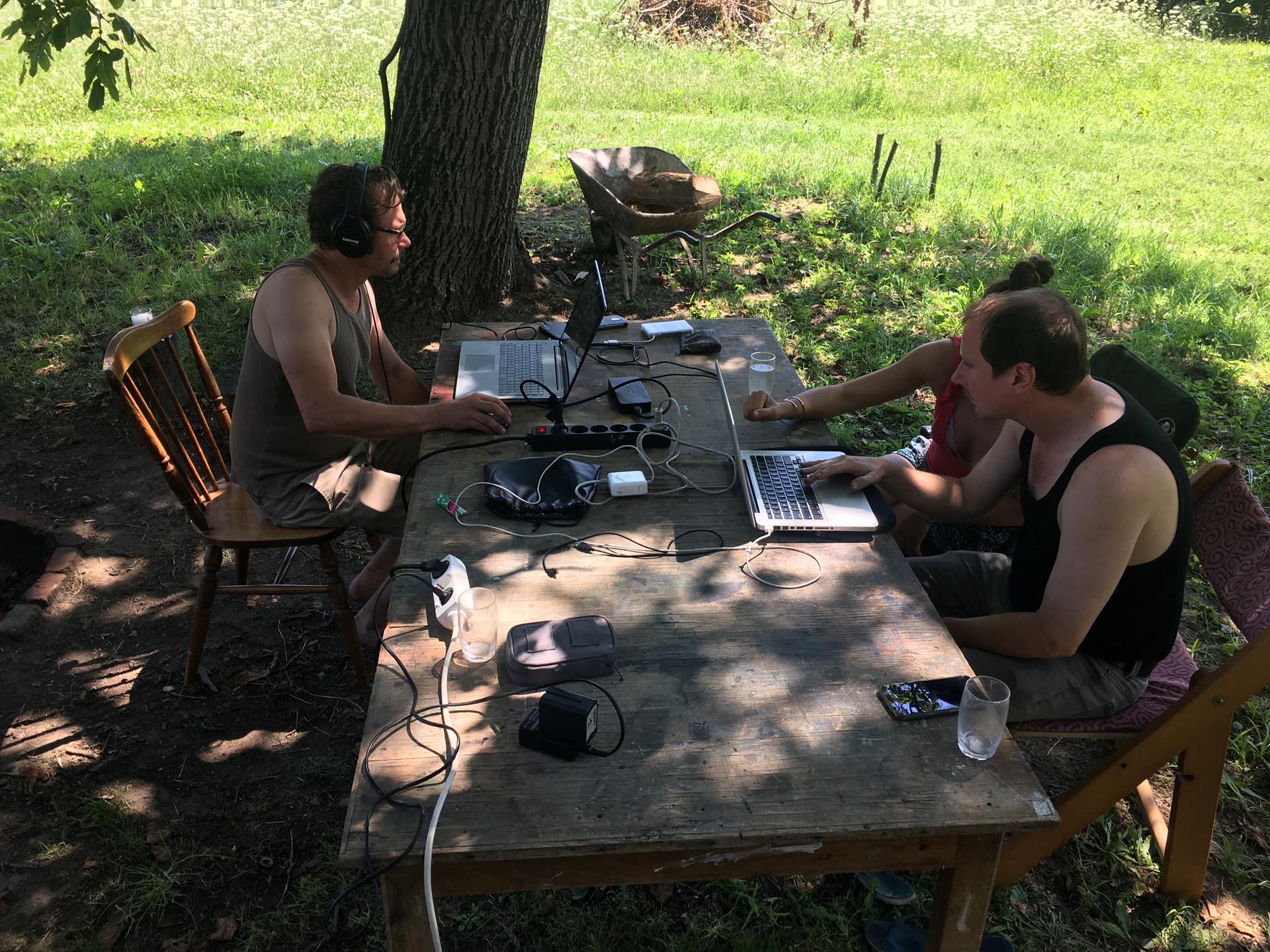 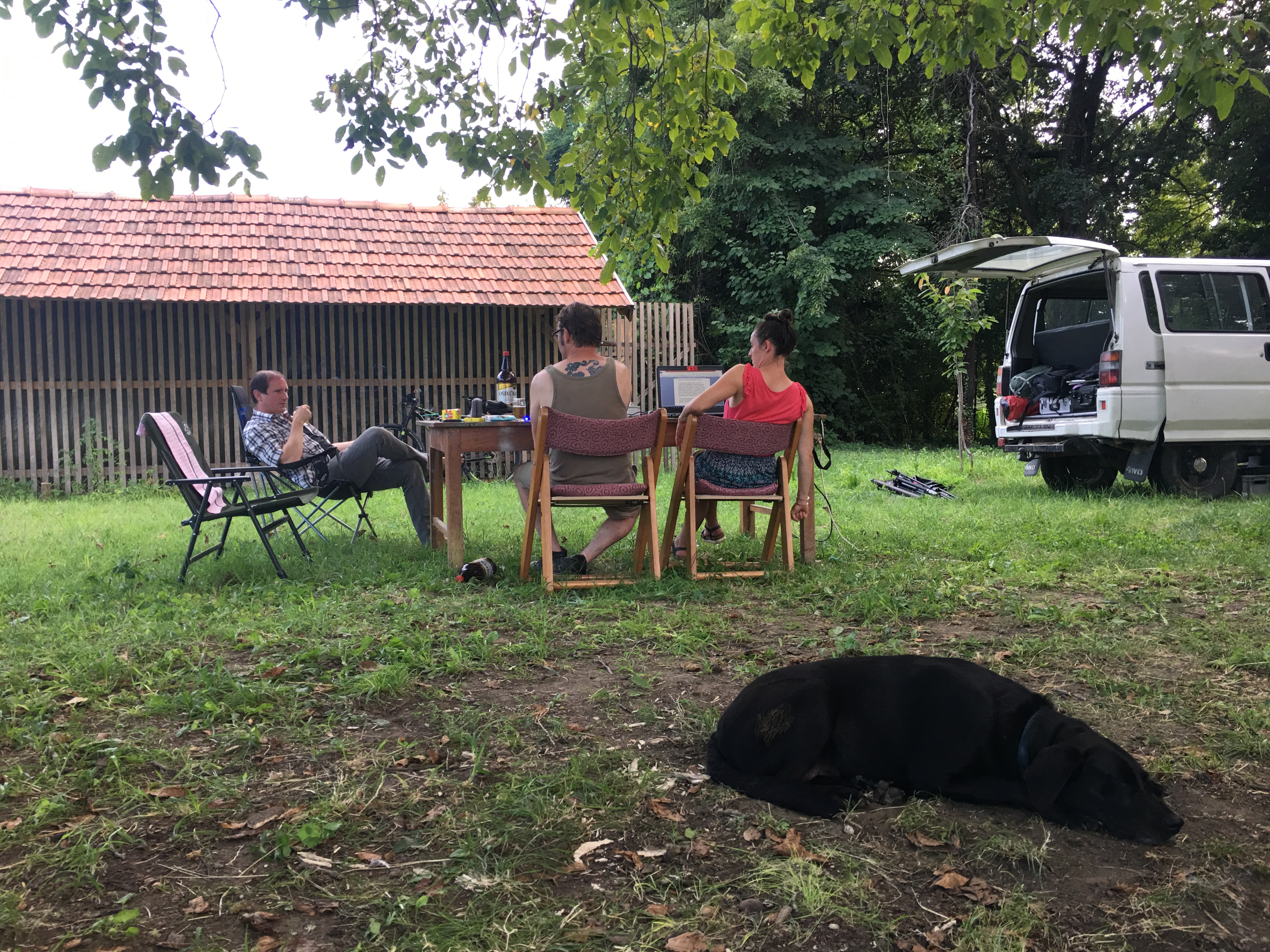 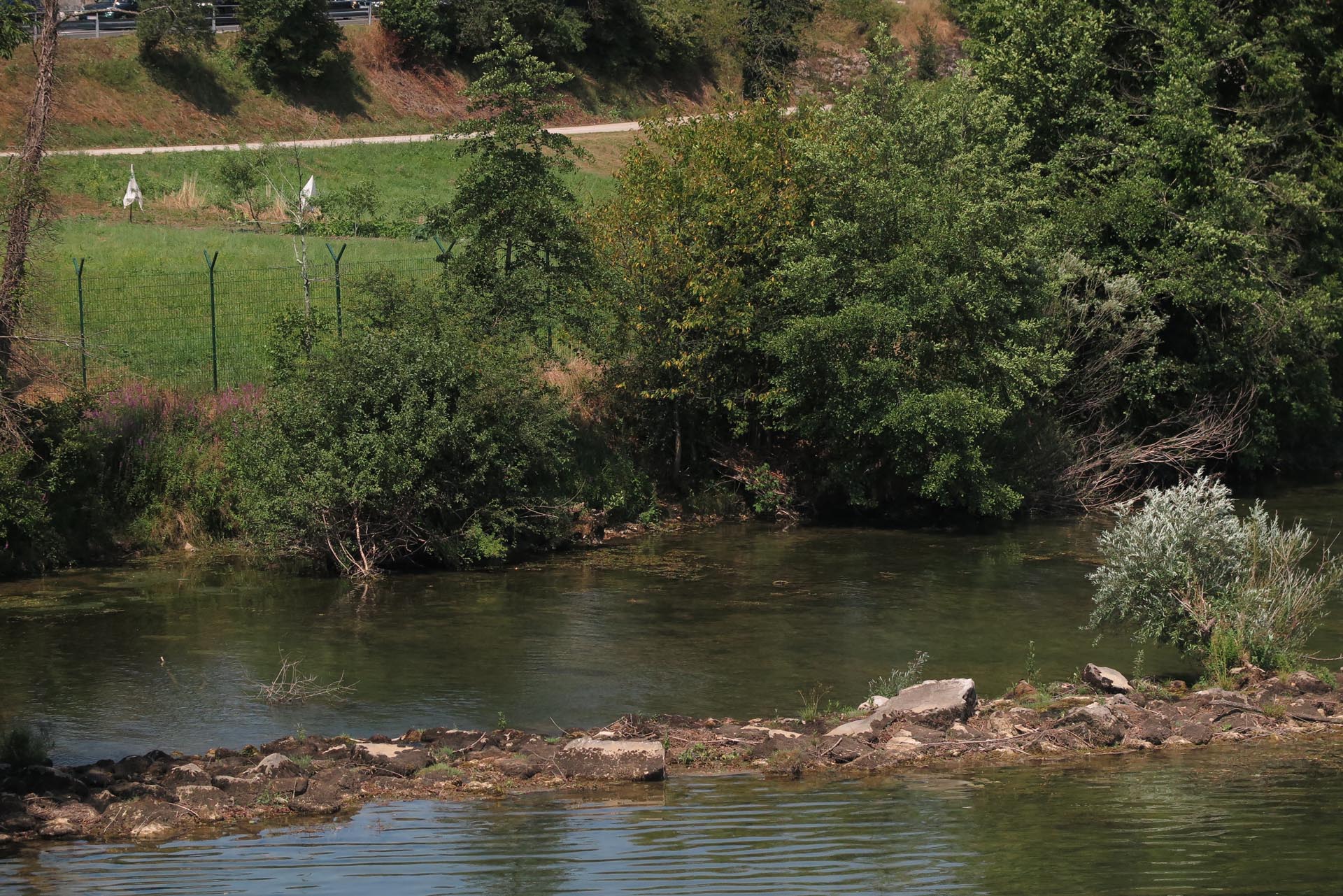 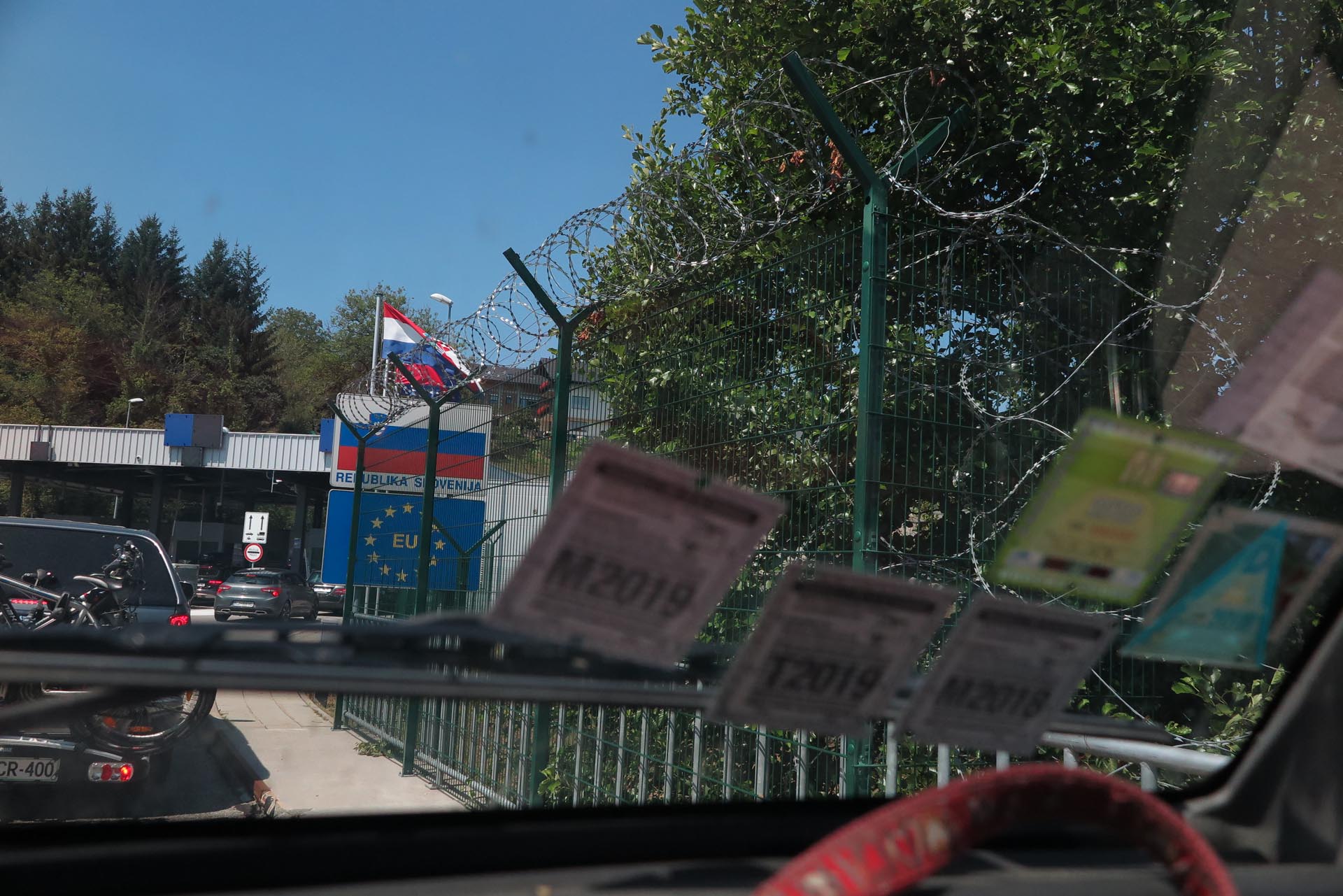 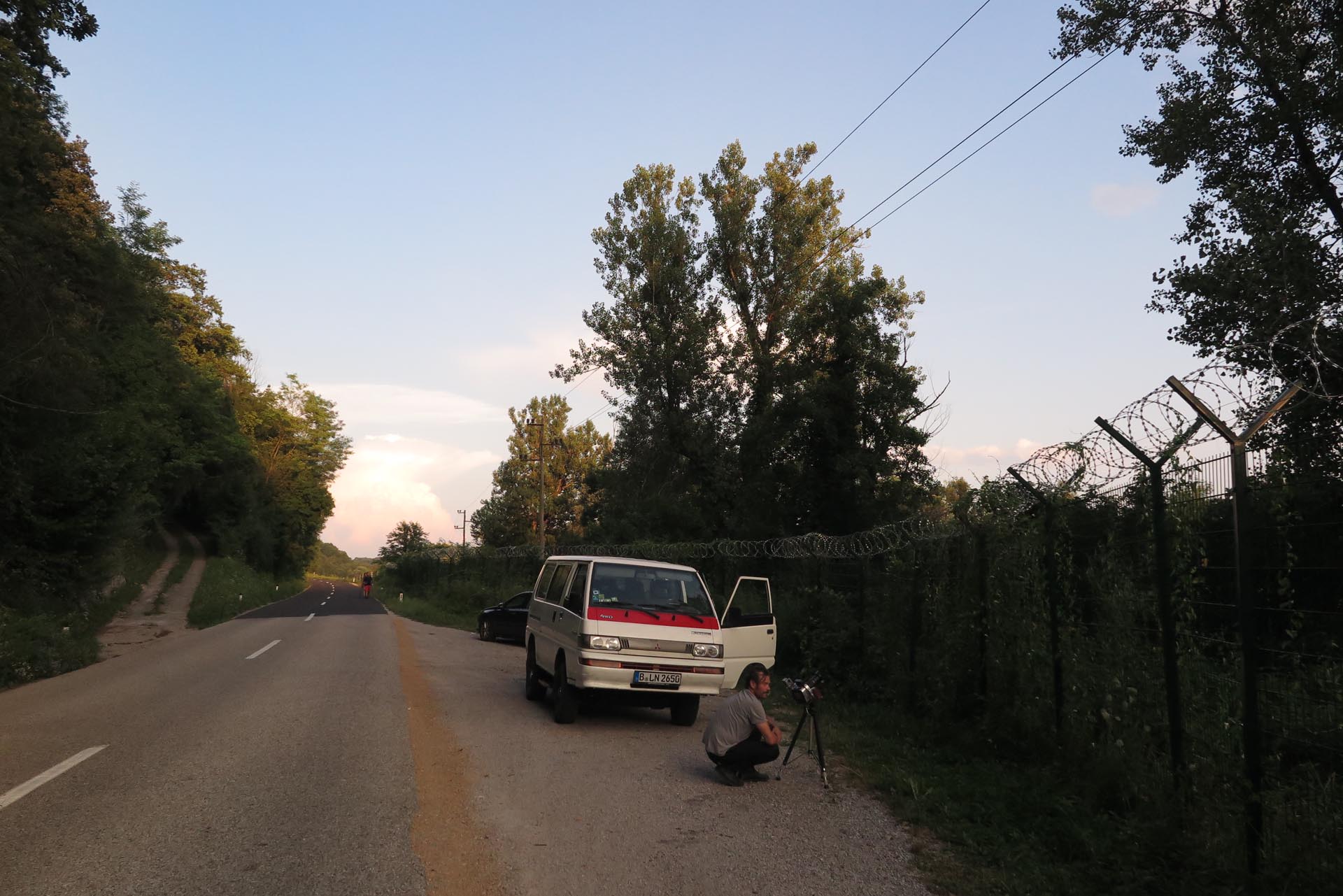 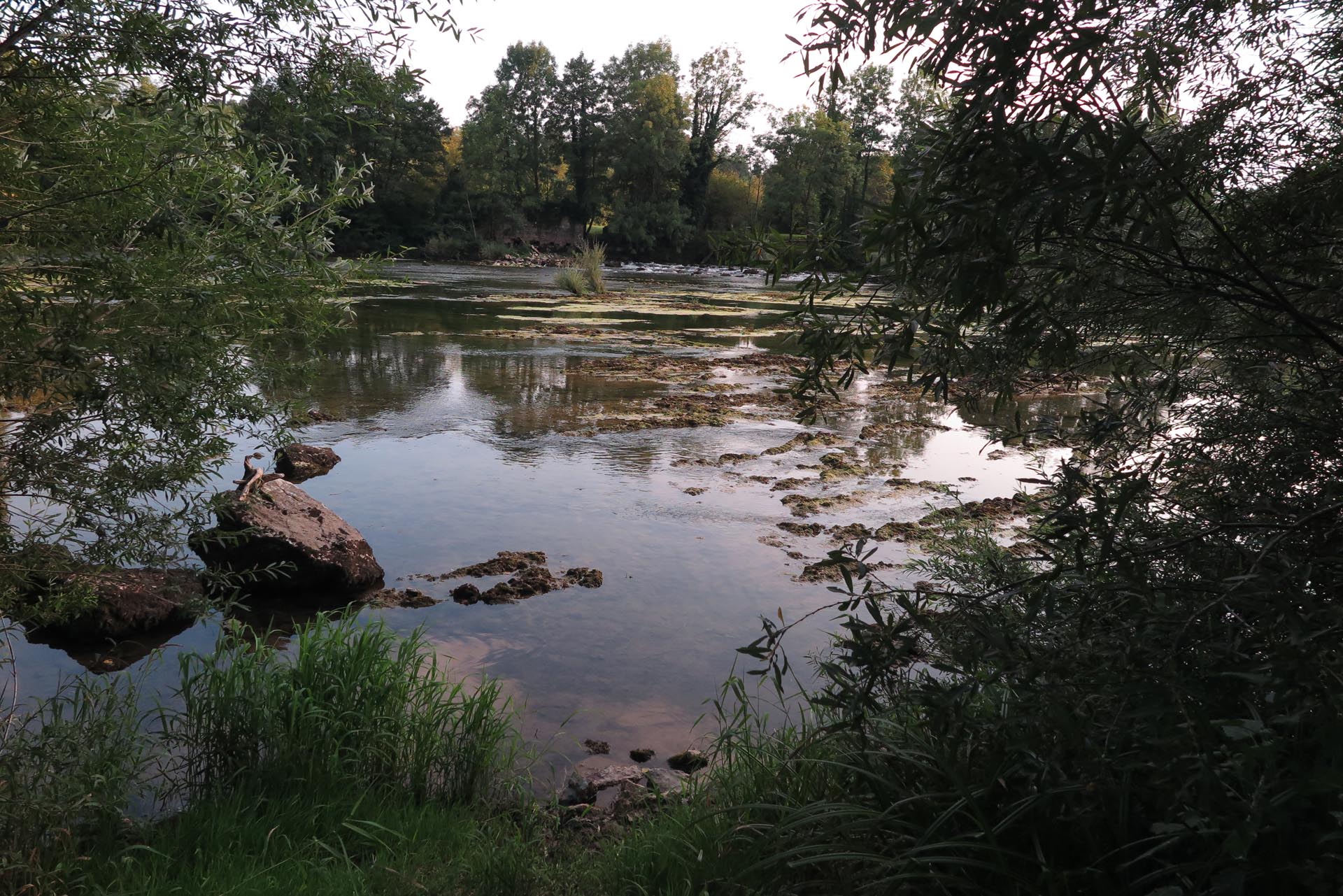 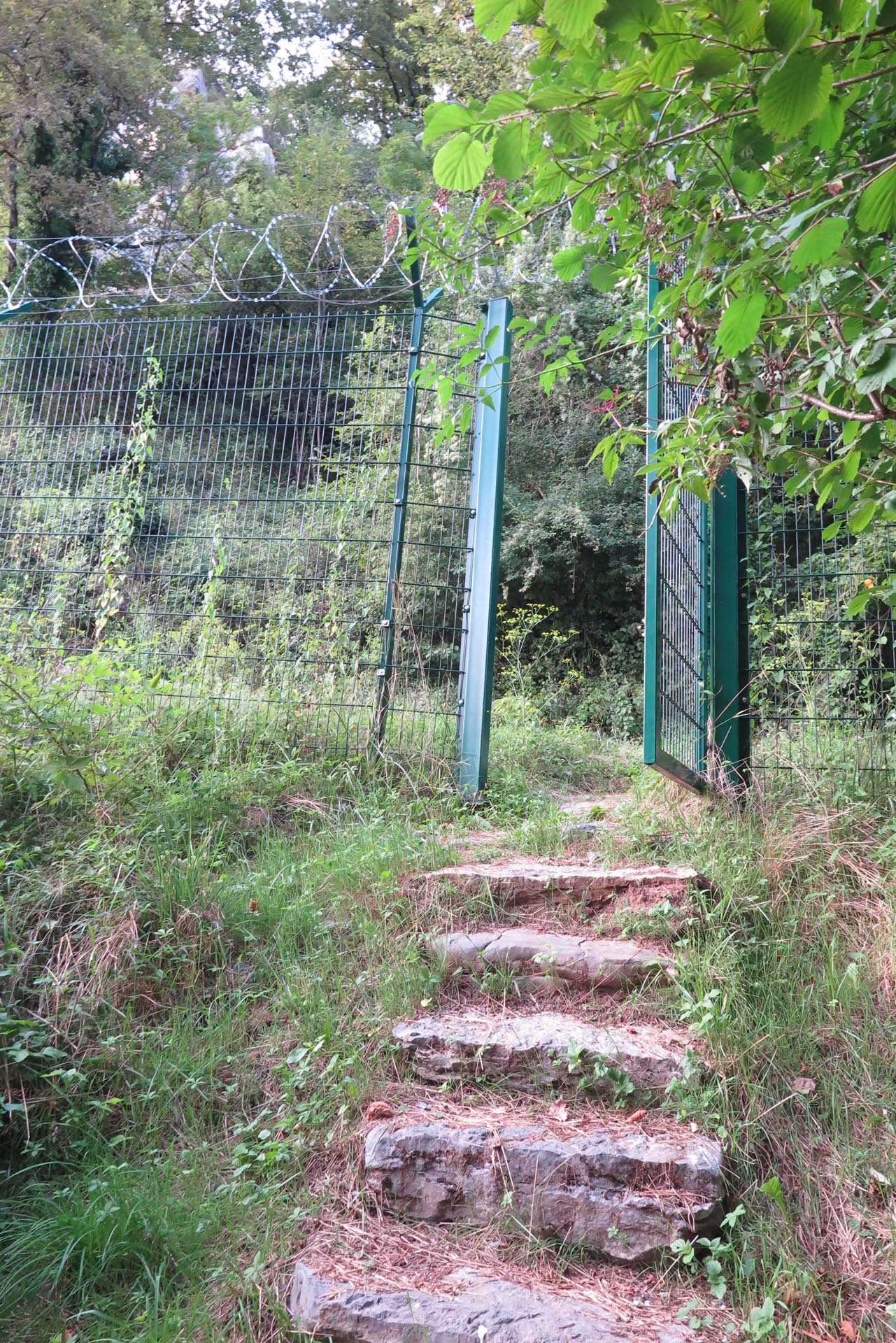 „The absolutization and sacralization of borders is perhaps even greater in the democratic state than in the monarchic state, which invented it, precisely because it expresses now the fact that the state is ideally the people's property just as it is the eminent representative/owner of the population's rights.But, as we know, this status has been relativized in the history of the 20th century, already before the official advent of `globalization', especially in the case of the European territories, both in the form of the emergence of supranational (super)borders, and in the form of a progressive dismantling of the multiple administrative functions of the national borders: some being steadily reinforced (particularly the police function, controlling the flows of immigrants, etc), others being weakened and separated from the borderline (eg the monetary independence or the fiscal control). As a consequence, the constitutive relationship between territory, population, and sovereignty is no longer taken for granted, at least when seen `from outside'. It tends to be replaced by various forms of mobile equilibrium between `internal' and `external' conflicting forces, and substitutedby stronger and broader `global borders', which appear as territorial projections of the political world order (or disorder).“‍
In Etienne Balibar, Europe as borderland, 2009‍